A River Runs Through It

A River Runs Through It

Take 30 local bands, a crowd dressed for the beach and an unlimited supply of bright blue cocktails and you’ve got South Africa’s best music festival. Amy Rankin gets wet and wild at Up The Creek.

It’s Friday afternoon and I’m itching to get on the road. From Cape Town it’s about a two-and-a-half-hour drive – three, if there’s traffic – and I just want to leave. The car is packed to the brim with doonas, eskies, drums, fishing rods, wine and towels. Being a pedant, I go over my checklist one more time. “Just relax,” says my husband Tim. “If we’ve forgotten something we can always borrow it.” He’s an ultra-mellow surfer dude, hence my need to overcompensate on the organising front. “We need to stop at Riviersonderend to get ice,” I say. It’s the last town before the dirt road turn-off to Up The Creek.

This will be my sixth Up The Creek and, for so many reasons, it’s my favourite of all the South African music festivals on the calendar. Tickets are limited to about 3000 people, but the quality of music is as good as you’ll find anywhere in the country. Anyone who’s done their share of multi-day camping festivals will also appreciate that here there are toilets, proper toilets. OK, there are portaloos too, but they can be avoided.

At the entrance, we’re welcomed by Christina Rovere. As the chief hands-on admin-organising accommodation-sorting festival helper, she’s a woman you want to know. “I see you are glamping this year,” she says, spotting the two bands on my arm. A couple of sweaty, dusty men greet us with wheelbarrows ready to carry our gear to the tent that’s been set up by Heartbreak Motel – it’s only 30 metres away, but we let them. After all, we are camping in style this year. Well, as stylish as mattresses in a large tent with a complimentary bottle  of Old Brown Sherry and two tin mugs can be.

Not long after setting off to find some friends – first-timers camping in the pleb section – I spy a white-bearded, wild-eyed man sporting a floral hat that looks as though it’s been in a dress-up box since the 1980s. It’s Anthony Bumstead, one of the organisers of this middle-of-nowhere gathering of licorice allsorts folk. He’s shouting orders at the sound guys in preparation for the night’s gigs. The first Up The Creek, held in 1990, was really just an awesome birthday party thrown for Bumstead by his pal Ann Sowden. The event grew, he went off to pursue other dreams and passions, but got involved again six years ago and now makes most of the musical decisions.

“The first thing we have to do,” I say to the first timers when I finally locate them, “is go look at the river.” Water bottles drained of H2O and refilled with gin, tonic and slices of lemon – we are nothing if not civilised – we head down to the water’s edge. The daytime River Stage is one of Up The Creek’s USPs. The bands play on shore while revellers on li-los, tyre tubes and giant blow-up animals kick back and watch the action. Last year the waterline was so low the stage was set up on a sand bank in the middle of the river, with everyone floating around it. This year is going to be quite different – we’ve had a lot of unexpected rain and the river is in full flow, meaning the stage has been shifted back to the grassy bank. The sky starts turning pale pink and we decide the river can wait till tomorrow – it’s time to hit the bar.

“What’s with all the blue drinks?” asks one of the newbies. They’re called Titanics and have been the festival cocktail for as many years as anyone can remember. I can’t really say what’s in one – vodka (or perhaps it’s gin), triple sec, blue curaçao and lemonade probably, plus whatever other alcohol is left over by Sunday, all served in half-litre plastic mugs. We order three and head to the post-sunset main stage.

Up The Creek is not really a platform for mainstream pop acts. Rather, you’ll discover the best rock bands, shredding blues guitarists, African drummers, skinny-jean punks and a mix of alternative, experimental and folk music. Most are local acts, but those who aren’t have some kind of link to South Africa.

After years of trial and error, we’ve developed a set of rules for festival survival. Never go too big on the first night. No man gets left behind. Always pack antacids. With this mantra running through my soon-to-meet-iceberg Titanic’d brain, I head to bed. Tomorrow is going to be a long,  hot day, and I want to be ready for it.

There should definitely be a rule about endless queues at coffee stations at 8.30am during a festival. As I hold a spot in one, Tim goes in search of another. Some 20 minutes later he returns with two steaming espressos. At this point I’m so close to the front, I order a second round – the obliging barista taking my BYO soy milk to make a cappuccino.

Even this early things are heating up, so we slather ourselves in sunscreen, don our cossies, blow up the tubes and head to the only place offering relief from the heat – the river. Almost immediately I lose Tim in the crowds of swimmers and blown-up dinosaurs, giraffes and sharks. The Nomadic Orchestra fires up jazzy brass instruments while I test the water’s depth. Passers-by offer sips of beer and the MC announces the winners of the best floating bar competition. A couple of hours later – you lose track of time here – I finally locate Tim, who informs me grumpily that he left his fishing tackle behind. I sympathise for a minute, but have other priorities – two more Creek virgins are arriving from Cape Town and they need a proper welcome. I fetch the coldest drink I have – a bottle of tequila that has been buried in ice since our arrival.

”You made it!” I say, jumping with joy and pouring shots down their throats. Wandering aimlessly, we meet guys who’ve set up a tight rope between two trees and are attempting to walk across. On another stage, local comedians are cracking jokes while sarong-clad girls doze on picnic blankets. As attractive as these distractions seem, we decide to seek shade and replenish drinks before heading back down to the river for an afternoon swim.

As evening draws near, it’s time to regroup in front of the main stage. The energy is contagious – everywhere you look people are singing, jumping, laughing and dancing. The lead singer from world-music band Hot Water sets his guitar on fire and the crowd goes wild. School friends I haven’t seen in years appear in front of me and we down shots from Coke bottle caps. The rest of the night turns into a blur of hugs, high-fives and drunken conversations. This Titanic is going down.

Sunday morning arrives and something stronger than a coffee is necessary. My aching head will only be saved by one thing: a plunge into the river. Well, that, two aspirin, a bacon-and-egg sandwich and a swig of free sherry. I rally the troops and we head down to the water for a lazy li-lo drift before the Sunday jam session, also known as the Church Service.

Musicians from all the bands get together, swapping in and out like tag teams and jamming some innovative and occasionally downright radical improvisational tunes. This is my favourite part of the festival, but it’s also bittersweet – the end is near. I dance in my swimmers with my inflatable tube around my hips as pack-up time edges ever closer. I attempt a game of hide-and-seek with Tim, making excuses for my constant disappearances to say goodbye to one person or the other until he looks at me sympathetically and says, “Baby, there’s always next year.”

South African Airways flies direct from Perth to Johannesburg, with connections from other Australian capitals and from Jo’burg to Cape Town.
flysaa.com

Up The Creek is held at the end of January each year on the Breede River outside Swellendam, about three hours’ drive from Cape Town. You can pitch your own tent at Up The Creek or opt for the glamping option, Heartbreak Motel, and have your campsite set up for you with tent, mattresses and linen, a VIP shower and toilet block, chill zone, breakfast and 24-hour security. Weekend tickets cost about US$70. Heartbreak Motel Cadillac camping costs about US$270 a tent (maximum of two people) for three days.
upthecreek.co.za
heartbreakmotel.co.za

To find more information on travelling in South Africa, including around Swellendam and the Western Cape, head to the official website.
southafrica.net 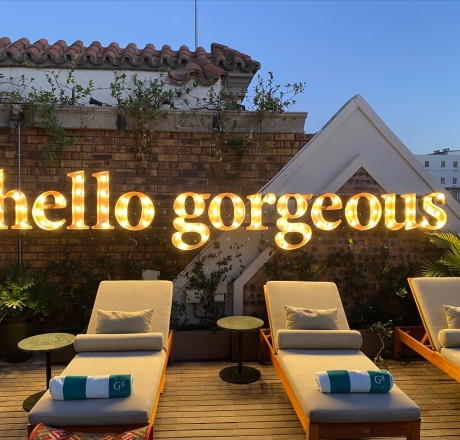