In Switzerland, it’s possible to hike, bike and fly across the storybook landscape, finding a pot of gold at the end of each rainbow – minimal effort required.

Hot air beats down on me as flames lick the air, puffing up the 32-metre-tall rainbow holding me suspended in this surreal state of being. Up here the world is silent, but if I really concentrate, I can hear the faint jangle of cowbells below.

I’m 2000 metres above the dairy farms and storybook chalets of Château-d’Oex and at eye level with 90 per cent of the Swiss Alps. Heralded as the hot-air ballooning capital of the world, it was here, in Switzerland’s picture-perfect Saane Valley, the Breitling Orbiter 3 – the first balloon to successfully circle the globe – took flight in 1999. Cold air descends from the mountains that encircle the valley to create a unique microclimate that provides top flying conditions year round.

But for me, it’s the effortless beauty that’s hard to beat.

Our pilot, Max Duncomb, points out explorer and adventurer Mike Horn’s house as we glide over chalets made from local pine and sun-tanned like Italian retirees. At our highest point we glimpse the sapphire sparkle of Lake Geneva. Yesterday I sat beside those waters, sipping a jubilant chasselas made by fourth-generation winemaker Jacques Joly among the terraced vineyards that spill down the south-facing slopes of UNESCO World Heritage-listed, French-speaking Lavaux. Today I can see from the peak of Jungfrau as far as Mont Blanc.

“We never know where we’re going, that’s the beauty of ballooning,” Max tells me. “We’re influenced by the mountains.”

Originally from Cambridgeshire, Max started visiting Château-d’Oex 15 years ago and reckons it’s the best place in the world to get high. In 2015 he decided to move here permanently. “I’ve flown in 32 countries, but this is home to me,” he says.

We’ve been airborne for around an hour when things get interesting. While flawless Swiss sunshine is beaming down on us, the light northerly we were riding on has completely carked it. We’re drifting, moving ever closer to a rock quarry that doesn’t look so cushy.

I’m practising the brace position Max demonstrated before lift-off and trying to will the basket down onto a lush green patch in the Sanne Valley below, while our calm leader works his mastery manoeuvring the vent line.

Like it or not, this landing is going to be unconventional – we’re heading straight for a line of fir trees. I close my eyes and brace for impact. A rush of branches, a thud and it’s over. Peering over the side of the basket, I marvel at Max’s skill; he’s managed to land us neatly – and safely – to one side of a barbed wire fence. Our cascading nylon rainbow, that up until a minute ago was keeping us afloat, had luckily deflated just enough to avoid impalement.

The unromantic side of hot-air ballooning no one tells you about is the all-hands-on-deck pack-down – made all the more interesting when you’re in an emergency landing site inaccessible by road. Adrenal glands juiced, I’m calling time for fondue.

At Le Chalet, I regroup with L’Etivaz cheese – a dairy delicacy made by hand in the high alpage (alpine homes) between May and October each year. It’s only my second day in Switzerland and I’ve already come to realise any exertion (already rendered enjoyable in stupefying landscapes) is really just a warm-up – an excuse to enjoy the finer things in life. Seeing the locals’ penchant for slow living, good food and even better wine, it’s little wonder Zurich residents call this region the Greece of Switzerland.

Sufficiently refuelled, I’m now ready for a high of a different kind. I ascend from the banks of Lake Thun to the 1950-metre summit of Mount Niederhorn, this time soaring into the skies by gondola. We whiz past mountain bikers taking the more challenging route to the humble mountain lodge up top, with a front-row seat to the splendour of the snow-dusted Bernese Alps. 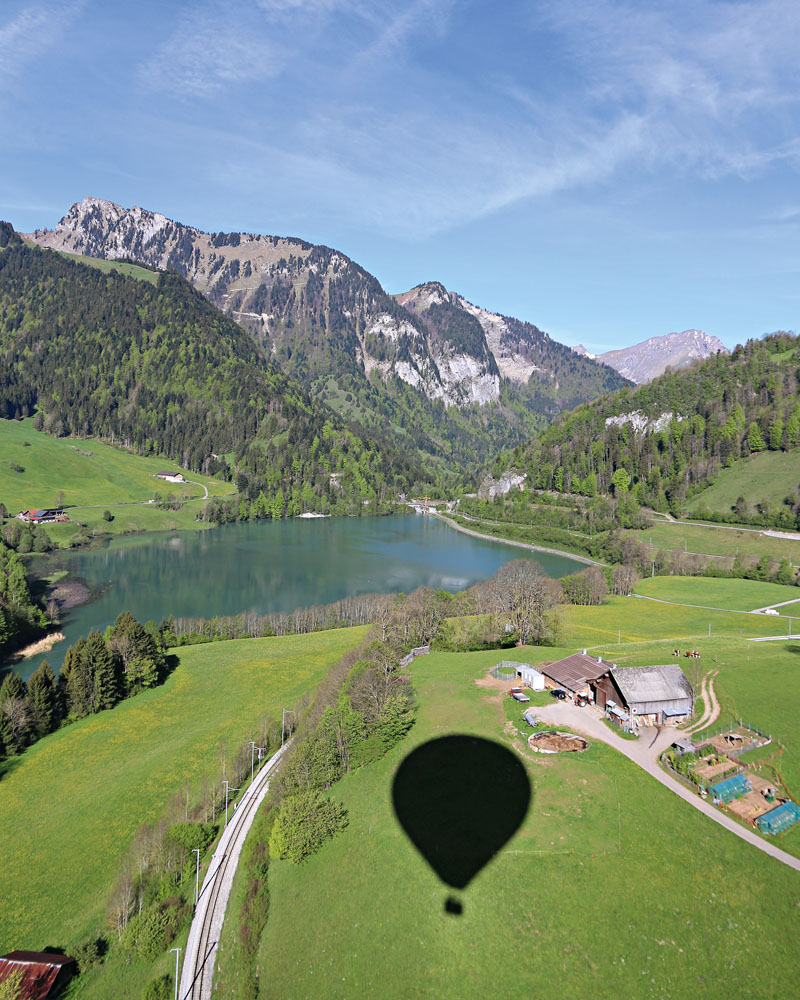 Following the breeze in the balloon capital of the world, Château-d’Oex. Click to view gallery

Standing on the edge of a paragliding platform that juts out over the Justistal Valley, I meet Pierre, the owner of the lodge, who has lived here for 25 years and admits he prefers it when the clouds are low and only the peaks are peeking out. “You have the feeling here you are in the middle of nowhere and there is nothing,” he says. Sensing he prefers it that way, I leave Pierre in peace with his panoramic view and continue to the summit to bathe in the sherbet-hued sunset.

Early the next morning, I join guide Urs Grossniklaus to hike the backbone of Niederhorn in the hope of meeting some of the locals. Within a few steps we strike gold – a male ibex, teetering on a precipitous ledge. During winter, Urs tells me, the tougher of the ibex can be found on top of the mountain waiting for the snow to blow away so they can get to the grass. Mostly, however, they stay down in the valley near the forest edge. The snow is starting to melt away in the spring sunshine and, as we walk on, we spot three chamois nibbling the grass and speckled snow chickens pecking around purple enzian flowers as golden eagles wheel overhead.

It would be easy to linger here, squirming with awe and jealousy in equal measure as paragliders launch themselves off Niederhorn to surf the thermals down into the spectacular valley below, but I’ve got a date with a celebrity chef on the banks of turquoise Lake Brienz.

Sonja Schilt and her family are fourth-generation farmers in the small village of Iseltwald. So when Sonja was handpicked to appear on the Swiss equivalent of My Kitchen Rules – called Landfrauenküche – and won, it was big news. Although softly spoken Sonja admits she would prefer to just make cheese. 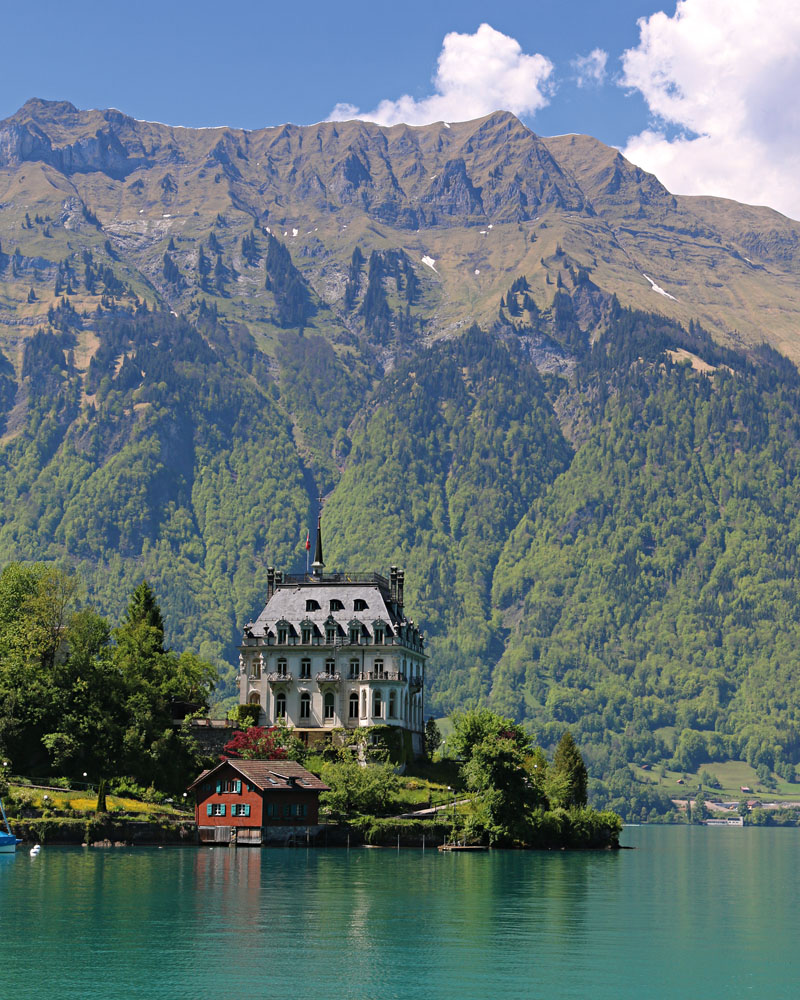 The fairytale-worthy Iseltwald Castle sits on a peninsula surrounded by the turquoise waters of Lake Brienz. Click to view gallery

“There were so many journalists and interviews – I don’t like pictures of me,” she says as she serves a platter pile with beef that’s been hot-smoked by her father who lives nearby, mountain cheese from their cellar, and a brioche-like bread called züpfe.

They’ll leave later this week with their 18 cows on an annual pilgrimage to the mountains, where they’ll spend the coming months making up to six wheels of cheese per day. This kind of workmanship has its rewards: my tastebuds can happily vouch for that.

Waving goodbye to Sonja, I sink into a meditation with nature, walking along the lake for a few kilometres to the Grandhotel Giessbach. Repaid by the sight of the foaming, five-tiered Giessbach Falls tumbling down the mountainside to the foot of this grand historic hotel, I sit below an ancient walnut tree and feel the magic the Swiss master painters who ‘discovered’ these falls in the eighteenth century must have felt.

That Switzerland is roughly two-thirds the size of Tasmania, offers 65,000 kilometres of walking trails and is serviced by a rail system that embarrasses most other urban public transport planners, this whole effort-vs-reward ratio is skewed in my favour.

In Lucerne, I ride the world’s steepest cog railway to the 2133-metre summit of Mount Pilatus to hike its trails, then watch teenagers tackle the high ropes course with a panorama of 73 peaks surrounding me as I eat forkfuls of chocolate cake.

On another day I experience a brief affair with the town of St Gallen, before collecting an e-bike at the train station and pedalling part of the perimeter of Lake Constance and across the border into Bregenz, Austria.

Reclining on the banks of the Rhine in the culture capital of Basel on my last day, I watch locals converge with charcoal grills and beer cans, while others brave the first swim of the season, jumping into the Rhine and letting the current carry them along.

It cements my theory that the natural beauty of Switzerland is easily enjoyed for just the price of admission. It’s a place where I’ve received more than my just reward, without any effort at all, really.

Qatar Airways flies to Zurich via Doha from cities in Australia.
qatarairways.com

The Swiss Travel Pass provides unlimited access to the country’s perpetually punctual trains, buses and ferries, as well as free access to more than 500 museums and discounts of up to 50 per cent on mountain railways and cableways. Children under 16 travel for free when accompanied by a guardian using the pass.
myswitzerland.com/rail

The humble but modern rooms at Berghaus Niederhorn make for a cosy night’s sleep after hiking in the heavens above Beatenberg. Twin rooms start at about US$145 a night.
niederhorn.ch

The Grandhotel Giessbach is steeped in history, from its herringbone floors and floral wallpaper to its great booming ballroom. Double rooms start at about US$200 a night.
giessbach.ch

It’s little wonder room 27 at the Hotel Schweizerhof is designed in homage to 007 – Sir Roger Moore himself stayed here in 2004, although the hotel has presided over Lucerne since 1876. Standard double rooms start at about US$340 a night.
hotelschweizerhof.com

Pending weather, hot-air balloons take flight every day in Château-d’Oex. Evening flights are also on offer from May to October. Prices start at about US$400 for an adult.
ballonchateaudoex.ch

Guided wildlife tours atop Mount Niederhorn run every Thursday, starting in July, and can be booked through Switzerland Tourism.
myswitzerland.com

Rent a Bike has 4500 bikes ready to go at 200 rental stations across the country, allowing you to drop them off at a different station to where you hired them.
rentabike.ch 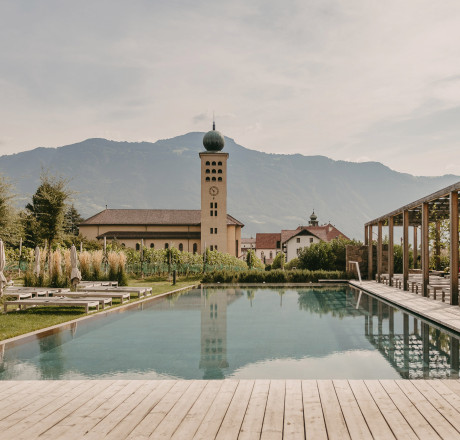 Just when you think Italy can’t get any better, they come... 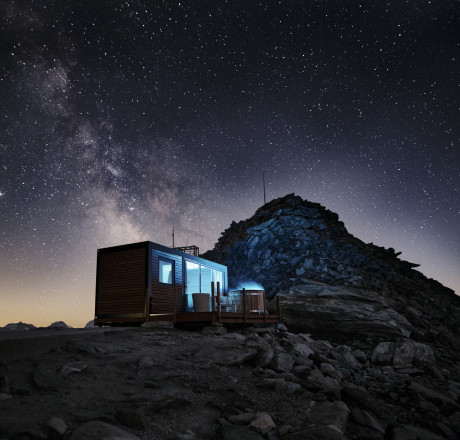 Cube Aletsch bills itself as a 'million star hotel', and both... 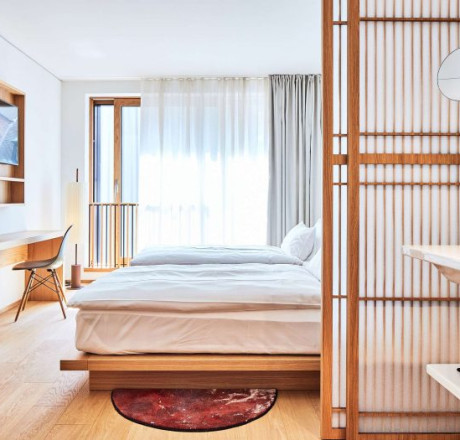 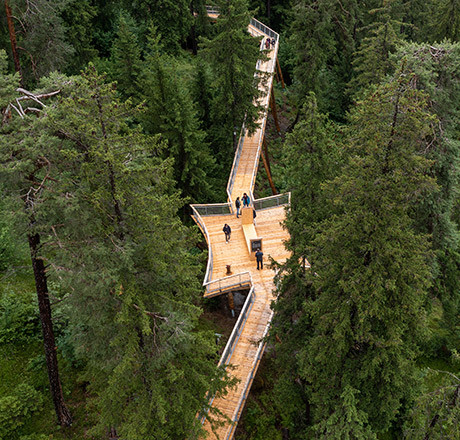 Spanning 1.5 kilometres, the longest treetop walk in the world... 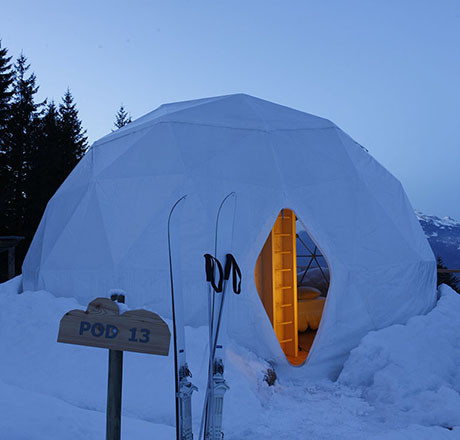 Whitepod is a high-tech eco-camp with all the comforts of a...

Whitepod is a high-tech eco-camp with all the comforts of a hotel in the stunning Swiss... 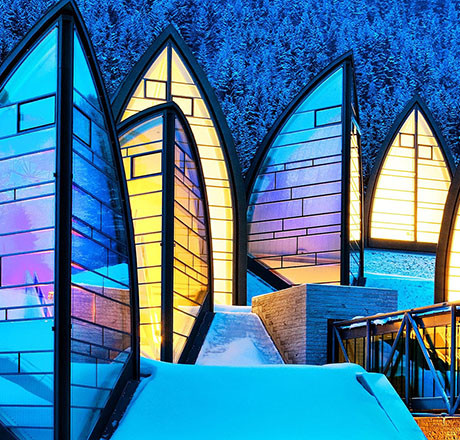 Located at an altitude of 1,800 metres, this futuristic...

Located at an altitude of 1,800 metres, this futuristic five-star resort even has its own... 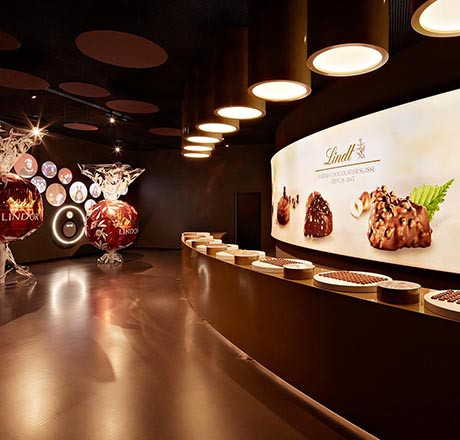 do
Sweet...
Sweet inspiration at Lindt’s Home of...
KILCHBERG, SWITZERLAND

Imagine this... You look up, far into the air and there, cascading down from an oversized... 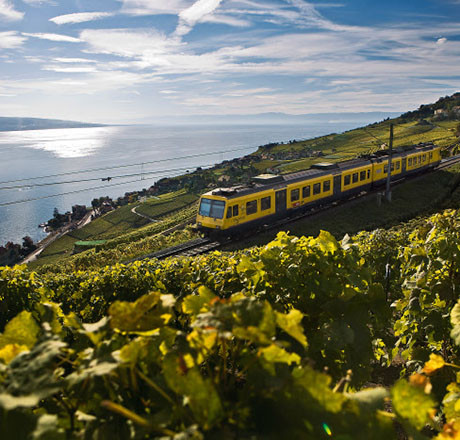 Calling all wine lovers! All aboard the train des vignes ...

Calling all wine lovers! All aboard the train des vignes  – otherwise known as the... 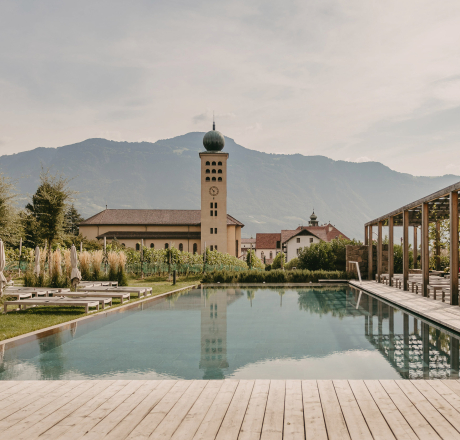 Just when you think Italy can’t get any better, they come along and build... 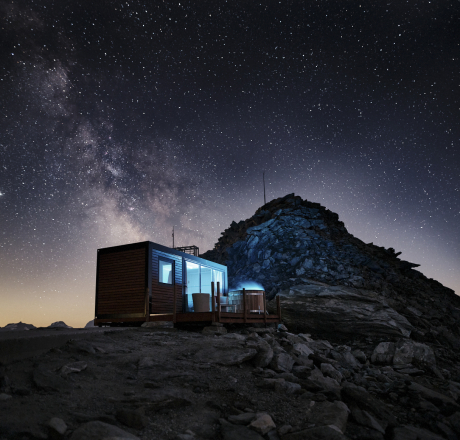 Cube Aletsch bills itself as a 'million star hotel', and both points  are... 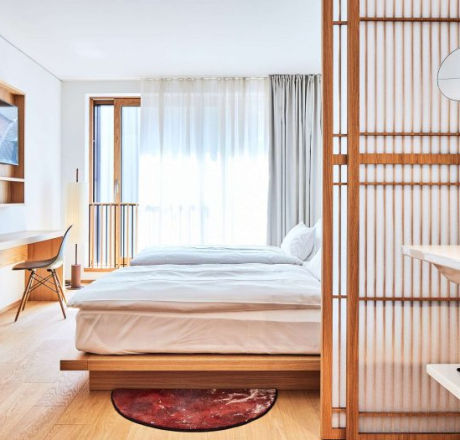 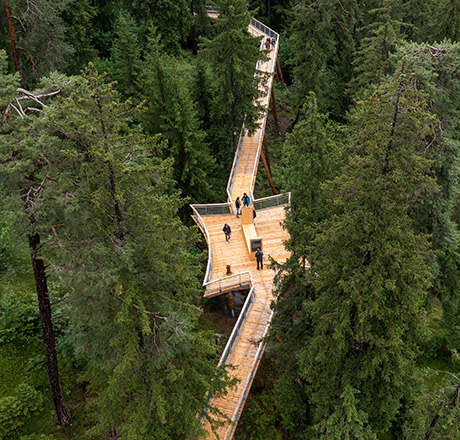 Spanning 1.5 kilometres, the longest treetop walk in the world has opened in...