In the rainforest of Malaysian Borneo, Catherine Best has a rare encounter with a bunch of endangered sun bears and meets the wildlife warrior fighting to save them.

Mary is behaving, well, like a bear with a sore foot. She’s curled up on her haunches, foot in her mouth, suckling away on her claws like a frightened child. Her chestnut eyes are wary and timid, and when she stands her gait is askew, as though her legs aren’t quite up to the task of carrying her.

Mary is pining for her mother’s milk – a trait common in Bornean sun bears snatched or orphaned from their mothers. The nurturer in me wants to pick her up, envelop her in my arms, nuzzle her little pointy ears and play noses with her precious little snout. But Mary is a wild animal with fierce canines and elongated claws that could probably disembowel me in an instant should she feel threatened by my embrace.

In the steamy jungles of Borneo, in the Malaysian state of Sabah, Mary is the face of a burgeoning campaign to save this precious and little-known species. Victims of both their charms and their obscurity, sun bears have long been targeted by poachers and pet-pilferers; their numbers dwindling with their habitat, yet they’ve failed to register a blip on the international conservation radar. This is, after all, a region preoccupied with the beloved and endearing orangutan, the iconic and endangered ape whose plight has attracted a global groundswell of support.

But speak to wildlife warrior Siew Te Wong and he’ll tell you the sun bear’s survival is even more perilous – there just hasn’t been the investment in research to justify hitting the panic button. Wong founded the Bornean Sun Bear Conservation Centre in 2008 and is waging a public campaign to draw international attention to the loveable species and ensure their survival. He looks every bit the crusader primed for battle. When we meet he’s wearing army fatigues and a camouflage hat, and speaks with the fervour and urgency of a man who would rather be building fences and relationships with donors than talking to this traveller, who, it becomes clear, should have done more research before holding court with such wildlife royalty.

Wong is nonetheless generous with his time, and we park our behinds on a dilapidated wooden platform in the rainforest orangutans as he explains his passion for these curious animals. A few metres away, Mary continues to suckle on her right hind foot, a bear gnaws on a length of bamboo, others scratch and forage in the dirt and larger beasts slumber in the treetops, dangling precariously from spindly branches like soft toys displaced in a typhoon.

“Tell me they’re not cute, tell me they don’t deserve our protection,” Wong says, pointing to a sun bear lying prostrate on a log, head back, displaying the distinctive golden-coloured crescent of chest fur from which the bears get their name. “Look at that, basking in the sun,” he says, clearly besotted with his furry charges. They are indeed adorable, and I feel very privileged to be here. It’s hoped the conservation centre will open to tourists early next year, bringing much-needed income and exposure for the barrel-bodied bears. But for now, I’m the only visitor, enjoying this rare opportunity to see these protected and vulnerable creatures in the flesh.

Sun bears are native to South-East Asia and are the smallest of the world’s eight bear species, weighing up to 64 kilograms – smaller than a St Bernard. They have black, shiny pelts and extremely long, slender tongues that unfurl like party whistles for scooping up honey and insects. Like all threatened species in Borneo, they have been decimated by deforestation as more and more rainforest is swallowed by palm oil plantations, which have grown like a cancer over much of Sabah. Stripped of their natural habitat, the bears often wind up in plantations, where they are shot by hunters, poached for body parts used in traditional medicine (the gall bladder is particularly prized) or, in the case of cubs, snatched as pets. Confined to small cages and deprived of their mother’s milk, the cubs are malnourished and stunted when they arrive at the centre after rescue.

“I’ve seen so many bears in captivity, it’s dirty,” Wong says. “We have bears that look like dwarfs. They’re short legged – this is from malnutrition as well as growing up in small cages, which stunts their growth.” The hope is to rehabilitate the bears so they can one day be released back into the wild. But so far none of the 28 bears has been repatriated because it’s an expensive exercise and many are still incapable of surviving on their own. They will see out their days in the 2.5-hectare forest enclosure adjoining the popular Sepilok Orangutan Rehabilitation Centre, 25 kilometres west of Sandakan. 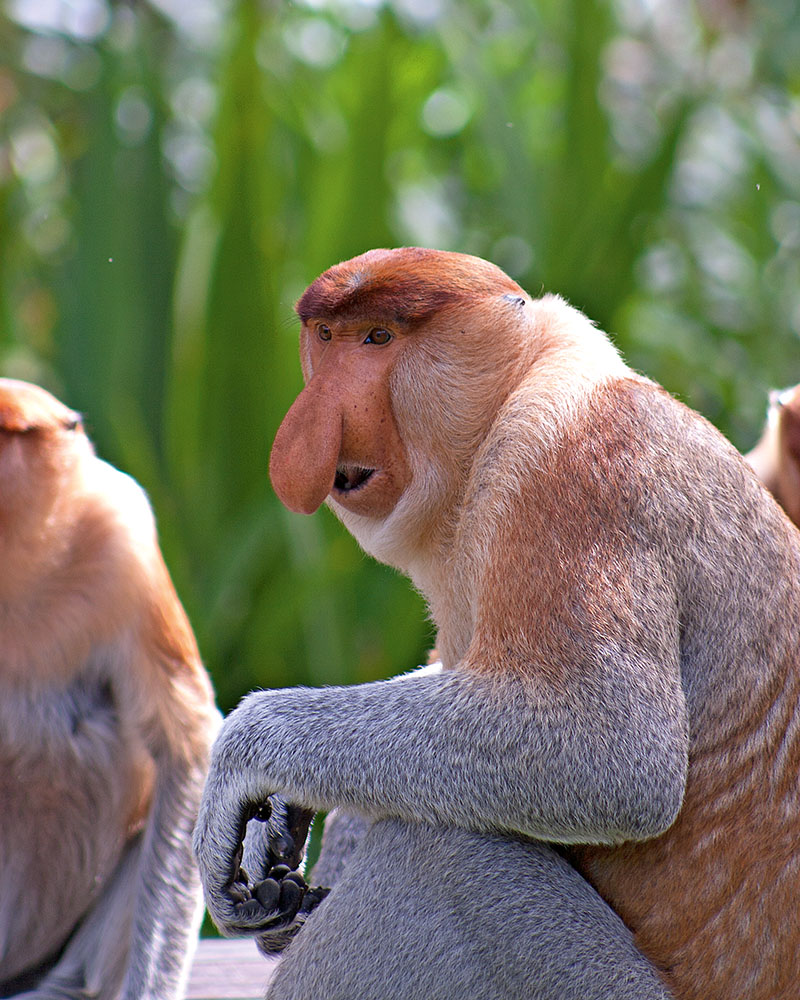 A male proboscis monkey with his distinctive ‘Gonzo’ nose. Click to view gallery

Visitor facilities are under construction at the centre and Wong hopes its unveiling to the public next year (2014) will give the sun bear campaign the impetus it needs. Sun bears are classified ‘vulnerable’ by the International Union for Conservation of Nature, but Wong says they belong on the ‘endangered’ or ‘critically endangered’ list. It’s estimated their population has decreased by 30 per cent in the last three decades and this decline will continue. With the region famed for its rich concentration of wildlife, it’s disturbing to learn that without intervention, one of Borneo’s most cherished creatures faces extinction.

Stirred by my afternoon with Wong, I travel deep into the Borneo jungle in an optimistic hunt for wild sun bears. I have the suspicion there’s more chance of spotting the Easter bunny lurking in the rainforest, but I’m determined to look. Leaving Sandakan, urban sprawl gives way to sprawling green – but it’s not rainforest hugging the road, rather palm plantations, almost as far as the eye can see. About two hours later, I arrive at Sukau in the Lower Kinabatangan Wildlife Sanctuary. Protected since 2003, the 26,000-hectare tract of rainforest has the highest concentration of wildlife in South-East Asia and forms a fraction of Sabah’s 3.1 million hectares of preserved, albeit fragmented, native forest.

It’s a short boat ride to my jungle lodge but long enough for swollen clouds to give way, administering a drenching in fitful bursts that lash my face. That night I sleep in a bungalow overlooking the river, surrounded by towering trees, heliconia and bird’s nest ferns. In the morning I wake to birdsong, slipping into the misty river just after dawn, with the jungle in full chorus. The boat putters along the Kinabatangan River (Sabah’s longest at 560 kilometres), the surface a glistening mocha fondant in the early-morning light under a sky of silvery sateen. An egret stokes the shallows, two brahminy kites swoop on unsuspecting small birds, catching them mid-flight, and a bunch of noisy proboscis monkeys scrabble in the branches. Their enormous, Gonzo-like orange noses are unmistakable, even as they leap from the branches in a boisterous acrobatic dance. The sun starts to colour the banks, thick with vines, tree roots and tangles of lush foliage, as we continue the forest rollcall of wildlife. Two oriental pied hornbill perch on naked treetop branches, a tiny blue-eared kingfisher hungrily studies the water and three silver-tailed monkeys sit silhouetted in the branches; their long tails dangling rigid-straight underneath them, making them look like stick puppets. 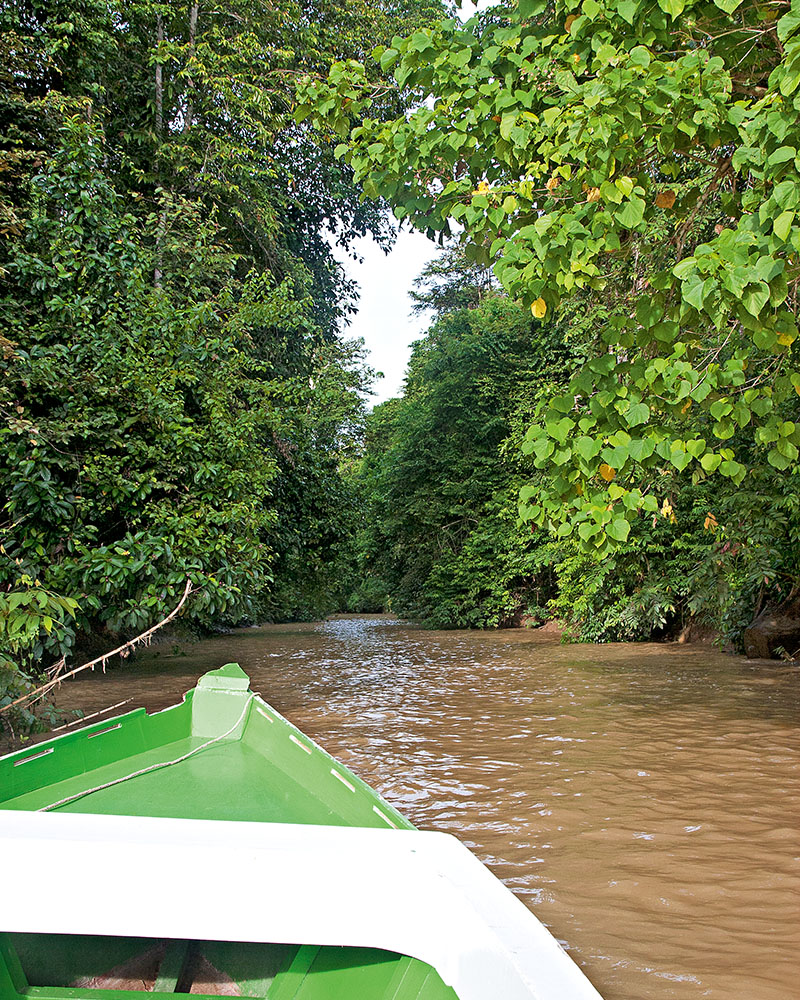 An early morning cruise on the Kinabatangan River is a must for wildlife spotting. Click to view gallery

Then we spot the orangutans: a cluster of three and then two mature apes, their dark features and ginger cape of arm hair visible through binoculars as they grab fistfuls of leaves. “How can you tell it’s an orangutan from here?” I ask my guide Jame, who scans the rainforest with his naked eye like a brain surgeon studying a CAT scan, identifying unseen anomalies in the shadows. “He saw it darling, he’s my protégé,” Jame replies, attributing this particular find to our skipper. “We’ve been doing this for a long time, you know where to look.”

We motor into a small tributary and the banks contract like a verdant tunnel around us before funnelling the boat into a broader expanse of water, known as Ox Bowl Lake and named after the  ox harnesses used for plowing fields. The ‘lake’ peters out in a strangle of floating hyacinth and water spangle, our cue to turn around and head back. I’ve seen many animals, but no sun bears. It’s not surprising. In 16 years plying these waters, Jame has only spotted one solitary bear. I hope with optimism that out there, somewhere in the wild, the dense jungle is harbouring scores of Mary’s relatives, tucked away safe from prying eyes.

Back in Sandakan I feel like a fish out of water returning to the compact city centre, squeezed between the rainforest and the sea. I stroll through the grubby backstreets and wander through the Sunday market, chatting to inquisitive locals along the way. “Where are you from? You see the orangutan?” they ask. “Yes,” I reply. “I saw the sun bears too.” My comments are met with frowns and disinterest. Clearly Wong still has a way to go in educating the public about these charismatic beasts.

The Sabah Hotel Sandakan is nestled in a pocket of rainforest, with rooms from US$37.
sabahhotel.com.my 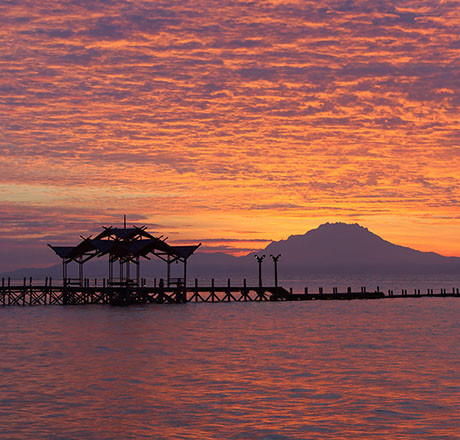 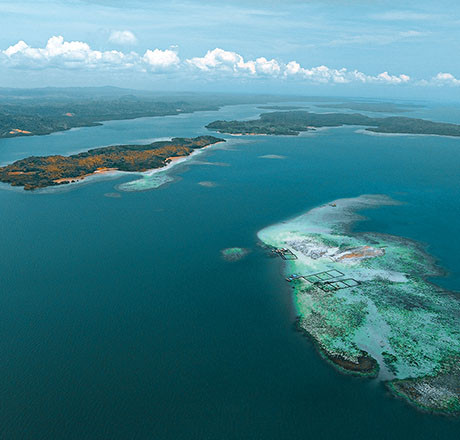 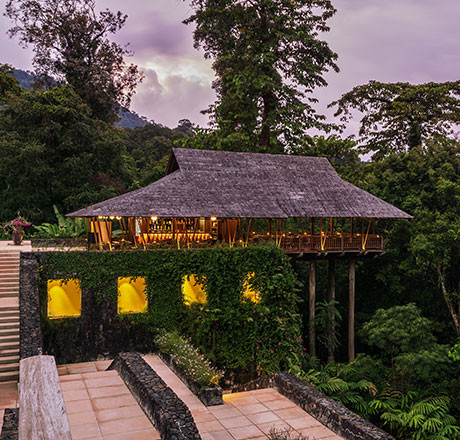 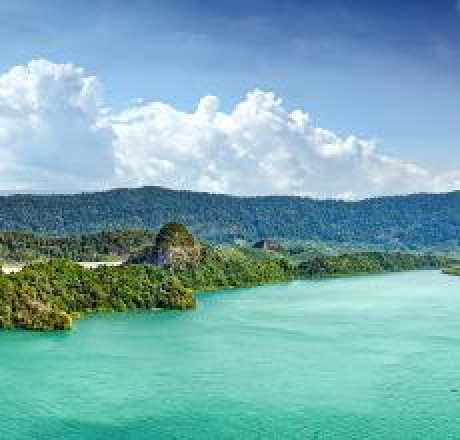 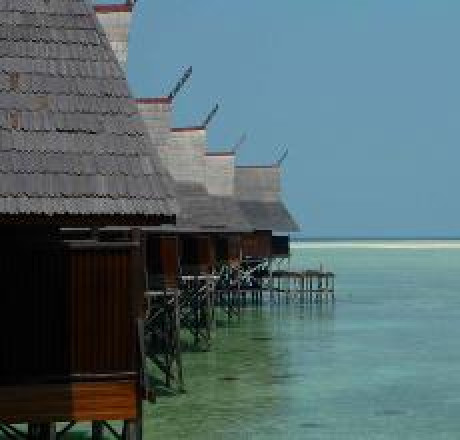 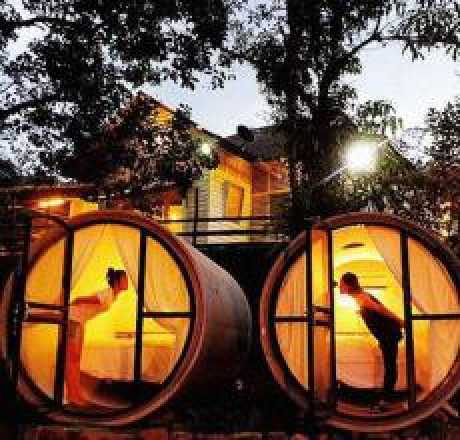 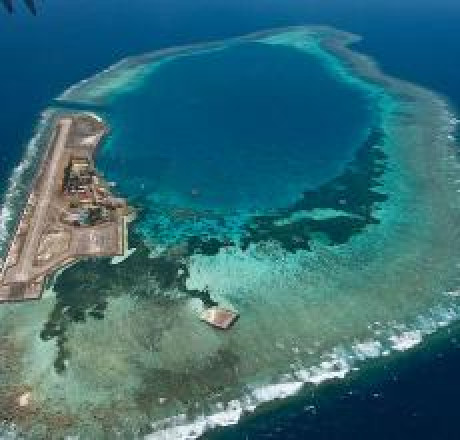 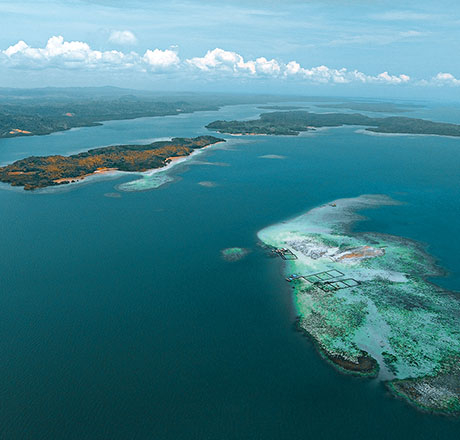