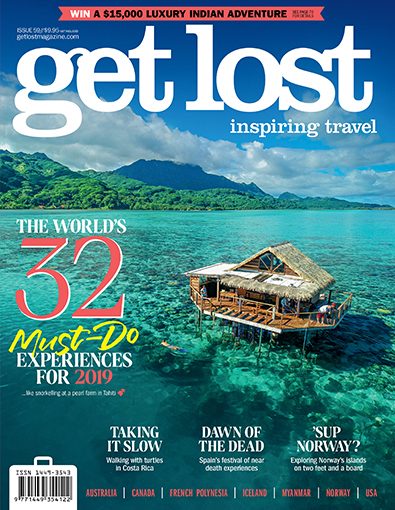 With 2019 upon us, and a whole year’s worth of epic adventures to start planning, it’s time to get cracking on your itinerary! That’s why in the 59th issue of get lost Magazine, we’ve searched high and low to find 2019’s best trips, latest openings, coolest trends and hottest destinations that you definitely don’t want to miss out on. So whether it’s dining in an ice cave in Canada, exploring Mexico’s answer to the Maldives, camping on the salt flats of Bolivia or attending a once-in-a-generation wine festival in Switzerland, consider this your guide to everything you need to see, do and explore this year. It’s not all New Year travel resolutions in this issue though, we also jump on the Aranui 5, a half cruise half cargo ship, in a bid to reach the far-flung Marquesas Islands, come face-to-tail with a leatherback turtle in the east coast of Costa Rica, stand-up paddle board through Norway in search of the midnight sun and get a whole new perspective of New York City. Plus, we share stories from Spain, Taiwan, Myanmar, Toronto and Australia’s Kakadu National Park. 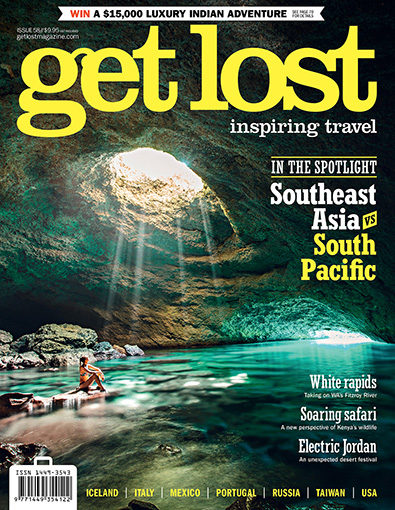 Trying to decide whether the golden sands and crystal clear waters of Southeast Asia are calling your name? Or if it’s the remote islands and friendly locals of the South Pacific that are begging you to visit? Well, you’re in luck. In this issue of get lost we’ve put Southeast Asia and the South Pacific to the test in an attempt to discover which region reigns supreme. From adrenaline-pumping canyoning experiences, no-expense-spared private resorts to pumping party boats, both Southeast Asia and the South Pacific tick a lot of boxes, but the winner depends on you. We also journey deep into the heart of the Amazon, scale the Grand Canyon, carb-load in Rome, dance in the Jordanian desert and power through Mexico in 12 days. Plus, we share stories from Kenya, Taipei, Reykjavik and Australia’s Kimberley region. 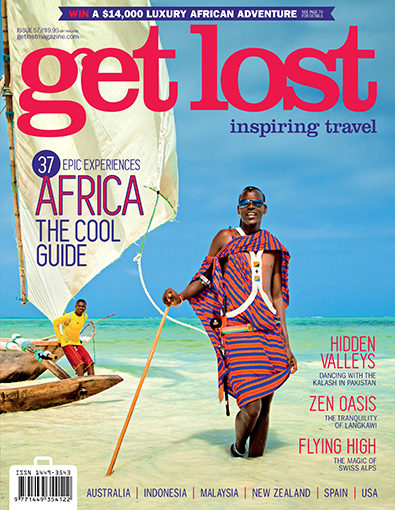 Arid savannahs and pristine lagoons? Of course. Safaris, sundowners and a front-row view of the local wildlife ? For sure. Partying until sun up in deserts and city skylines? You bet. You see, we know about that Africa trip you’ve been dreaming of (yep, even your fantasies about holding a lion cub above your head and singing Hakuna Matata). And to aid your planning, we’ve uncovered the coolest of the cool that this epic continent has to offer. Your adventure starts here. We also explore the vibrant streets of New York City’s Lower East Side after dark, discover a new kind of zen in Malaysia, explore the backcountry of New Zealand, and cross over into a paradise above and below the surface on Australia’s Lord Howe Island. Plus, we’ve got tales from Catalonia, Abu Dhabi, Switzerland, the Philippines and more. 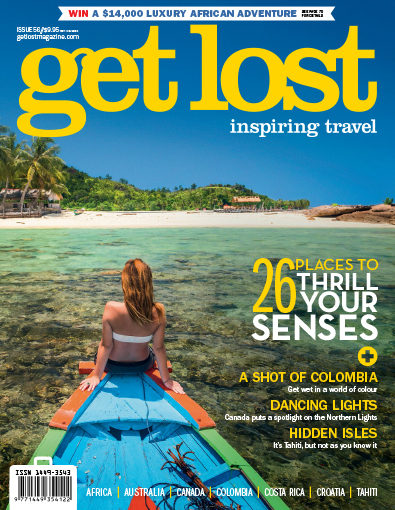 Travel is more than just what you see. Embark on a sensory feast and immerse yourself in sounds, smells, sights, tastes and touch around the globe with our collection of 26 places to thrill your senses. Savour the taste of high-altitude wine in Argentina and indulge in a massage by waterfall in Italy. Hear the clap-triggered chirp engineered into an ancient Mexican temple. Get a whiff of the sulphurous steam billowing from Iceland’s boiling mud pots and marvel at the ethereal sight of bioluminescence in Puerto Rico. Plus, we forgo French Polynesia’s tourist-havens like Bora Bora in favour of Tahiti’s rich outer isles, wander into the depths of Costa Rica’s rainforests, take the plunge on a kayaking adventure in Croatia, and so much more. 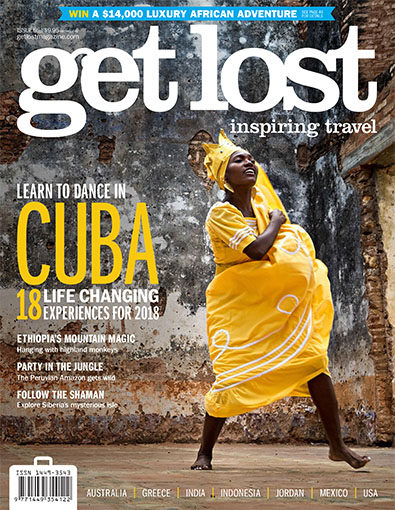 In 2018, don’t resolve to get lost on just any new adventure; get lost with purpose. Say hello to our 18 life-changing experiences – aka the New Years’ resolutions you’ll actually want to keep. Learn to dance in Cuba, successfully hold a single breath while free diving in Indonesia, conquer your fear of heights in the rugged hills of the United Kingdom and master tracking wildlife and bush tucker in Namibia. Ready to go deeper? You’ll also learn the secrets of a shaman in Siberia, meet the creatures of the Peruvian Amazon, delve into the history of USA’s Fort Worth and take flight on a delectable food and drink safari in Australia, plus so much more. 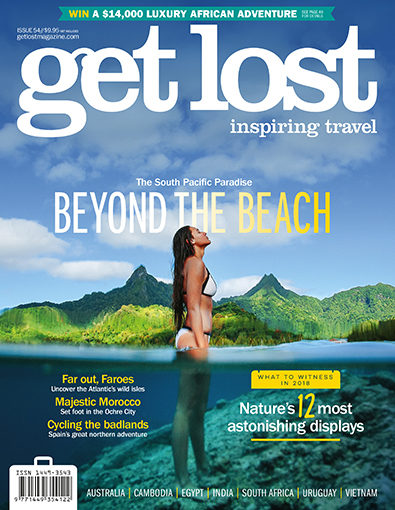 It turns out the Garden of Eden has been hiding right under your nose all this time. Forget the beach, Rarotonga’s lusty hinterland is where the real goods are. Explore it inch by inch in issue 54, hiking, biking and glamping across its unblemished, jungle-like slopes before springing into another wild archipelago on the opposite corner of the globe: the Faroes. These wild isles, where nature and folklore collide, appear to have jumped straight from the pages of a storybook, as do the bewitching backstreets of Marrakech and Spain’s surreal (and little explored) desert landscapes. There’s also a close encounter with an apex predator below the waves and a look at some of the planet’s most baffling natural phenomena, month by month. 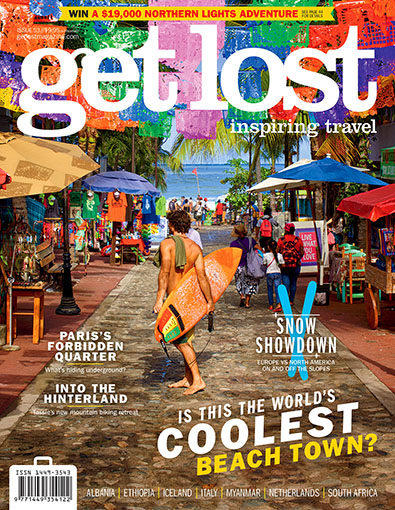 It turns out there is heaven on Earth, and it’s a laid-back village by the beach in Mexico. Uncover surfing nirvana in issue 53, then bundle up for a battle in the snow. North America takes on Europe’s slopes, with each continent showing off its best ski terrain, slope-side cuisine, cool accommodation and ski-free winter entertainment. There’s also a journey on Myanmar’s railway, an illicit escapade in Paris’s underground, a market-hopping adventure in the far west of China, a new Australian cycling retreat, plus so much more. 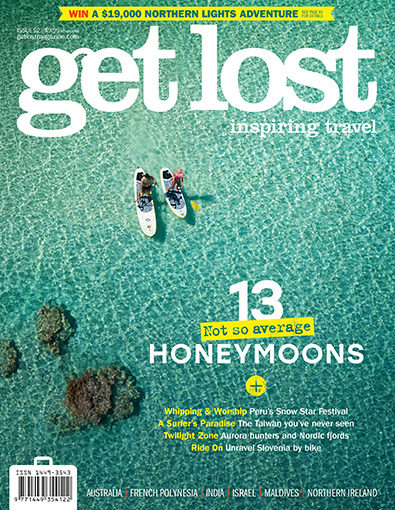 As we all know by now, the formula to winning at life is action plus downtime. Add someone special into the mix and you’ve got a match made in heaven. So in this issue we’ve rustled up 13 rather unconventional two-part honeymoons that even Cupid himself would struggle to surpass. There’s also the chance to witness whipping and worship at a loopy Peruvian festival, a fashion designer’s guide to Tel Aviv, Taiwan’s off-the-radar surfing scene and so much more. 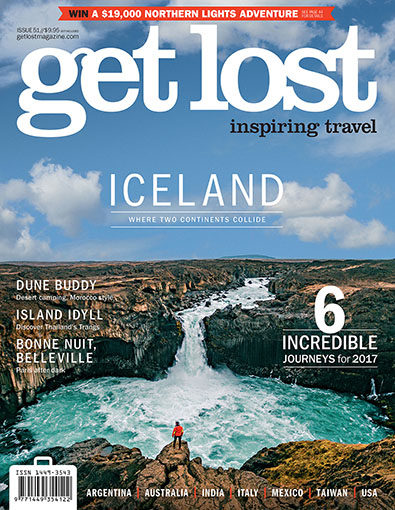 In 2017 make a resolution to follow adventure. We’ve found six amazing journeys to get you started. Camp under the northern lights in Canada, enter the wilds in Guyana, slip and slide through the canyons of Corsica, cycle into the mountains to meet the gorillas of Rwanda and cruise the waters of Raja Ampat, where incredible creatures thrive under the waves. Plus, you’ll also go on a road trip to see where continents meet in Iceland. Relax a while in Thailand’s idyllic Trang Islands. Travel from Atlantic to Andes in Argentina. Plus there’s glamping in Morocco, Memphis blues, Paris, South Australia and so much more. 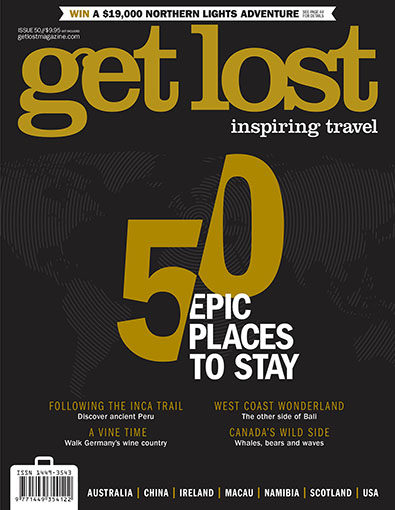 It’s our fiftieth issue! Experience bedtime bliss around the globe, when we share 50 epic places to stay. Get friendly with nature in Canada, head high into the Peruvian Andes, swim with humpbacks in Western Australia and hike through the Rhine Valley in Germany. Plus, there’s Northern Ireland, Namibia, Macau and so much more.